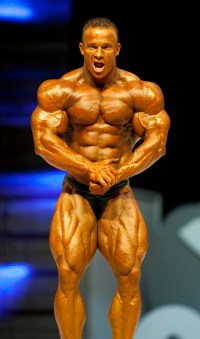 If you really want something … you do whatever it takes to get it. Just look at Ronny Rockel.

He started lifting in 1988 at age 16 with self-made weights while living under communist rule in then East Germany. What he wanted were the very muscles he saw rippling across Arnold Schwarzenegger‘s body in the film ‘Conan the Barbarian’ , unfortunately gyms, let alone weights, did not exist in his section of the country.  They were far off, behind the Berlin Wall.

A year later when that wall was eventually torn down the first thing Rockel did was visit a commercial gym when visiting his sister in West Germany. When a gym did open in his neighborhood, he joined and quickly gained mass, while improving his nutrition plan.

At his first competition, the Hessian Championships, Rockel placed last in his class, however, a year later he came back and won the 1995 NABBA German Nationals and placed third at the NABBA Mr. Universe. After years of hard work, filled with dozens of competitions, Rockel went pro in 2002 by winning the International German Championships. He has since competed internationally.