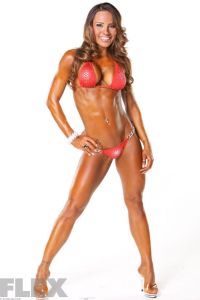 When Nathalia Melo moved to the U.S. in 2004 she quickly became accustomed to the American way of life, lazy days filled with processed foods. Not only were the numbers on her scale increasing quicker than she ever thought possible, but so was her waistline.

In 2009, Melo took control and set out after the American dream — that in which anything is possible — and began transforming herself into a future Bikini Olympia Champion. She signed up for her first NPC event that year. Melo not only won her class but also took home the overall trophy.

Melo picked up pro wins just as quickly as she picked up her pro card. She won her first two professional competitions and placed 3rd in her third competition, qualifying her for the Olympia. She placed in the top five of the 2011 and 2012 Arnold Classics and in 2012 took the Bikini Olympia Champion title.

In a turn of events, Nathalia Melo is your new 2012 Bikini Olympia Winner

In a turn of events, Nathalia Melo is your new 2012 Bikini Olympia Winner