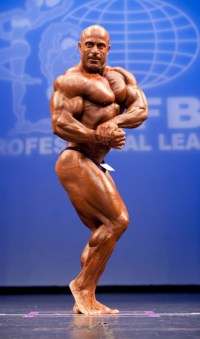 Michael Kefalianos strength has worked to his advantage most his life.

As a teen, he used it to obtain a job as a stonemason and later when serving in the Greek army. But it was when he began weightlifting at the age of 20, as a hobby, that his strength became a driving force that would transform his life.

It wasn’t until 1998 though that Kefalianos began entering local Greek bodybuilding competitions like the Mr. Aegean and Mr. Greece, which he won multiple times. Upon winning the Wabba world championships, invitations to various international competitions were sent Kefalianos’ way.

In 2009, after placing third in the heavyweight division of the Arnold Classic Amateur competition, as an Australian citizen, Kefalianos received his pro card from the Australian IFBB. He qualified for the 2009 Mr. Olympia in his very first professional competition. Since then, Kefalianos has competed in more than 25 different IFBB pro shows placing in the Top-5 in most of them. Not to mention, he has made history by being the first Greek to compete at the Mr. Olympia.

Watch the full posing routine of Michael Kefalianos at the 2015 Arnold Classic.