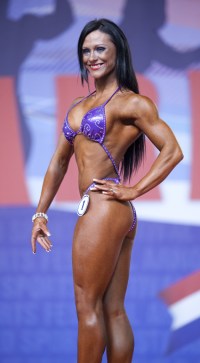 Kizzy Vaines made the transformation from the dancing scene to the bodybuilding/fitness  scene in 2004, where she took to the stage and won the EFBB British Championships the same year and received her pro card.

The fitness category was perfect for Vaines, as she used her contortionism in her routines to entertain the audiences and bring something completely different to the pro stage in the States. Her first pro show was in 2005 in North Carolina, although her physique was praised, Vaines knew that she had a lot of work to do in order to compete with the best in the world.

On her return to the stage in 2009, still not happy with her performance, Vaines returned one month later to take a first place at Fort Lauderdale in Florida. She continues to compete in events around the world.