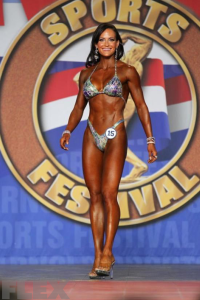 Erin Stern, an equestrian at heart, was a track and field star by nature, but built herself into a Ms. Figure Olympia .

Stern followed her father’s advice when he encouraged her to win a collegiate scholarship to the University of Florida, where she earned Junior All-American status in the high jump. He had seen his daughter running and leaping alongside her horse, and knew she had what it would take. It was during this time on the track and field team that Stern began to weight train, but it wasn’t until after college that she began focusing on aesthetic lifts.

After flipping through a few fitness magazines, and this time receiving encouragement from friends, Stern entered a few amatuer competitions.  The 2009 Arnold Classic was her pro debut, and fourth show ever.  While she may have finished in 10th place at the 2009 Arnold, Stern took sixth at the 2009 Olympia.

Always motivated to be better than her previous best, Stern has gone on to take two Olympia titles and is planning to take many more.

Erin Stern after placing 3rd in the 2013 Arnold Classic